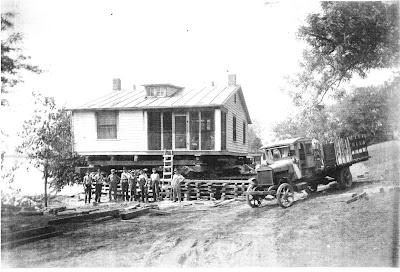 Recently, I ordered and received a batch of old pictures from the Missouri Historical Society.  All were taken by Mr. George A. Warren, a photographer for the US Army Corps of Engineers from 1907-1918.  The Society notes that these photos were created from original glass plate negatives loaned to them by Mr. Warren’s descendants.  Bless their hearts!  Truly, how forward-thinking and unselfish of them to share these images.

The caption on the copy of this photograph is: “Moving the Warren Family House. Grandma Warren and Children sitting on porch.” See the ladder? Can you even imagine doing all this work? I give Grandma a great big hand for climbing up there! Moving the whole house saved all the packing, I guess!  This home is (was?)  in the Old Jamestown area, Down By The River (thank you, Neil Young).

This one is, of course, the first I’m sharing.  Mr. Warren took a number of photographs along the Missouri River here in the Old Jamestown Area.  I wish some were marked with more specificity, but they are great fun if you like old things.

Oh, by the way, here is Grandma Warren’s house after it was moved.  The thing that strikes me about this picture is how the Coca-Cola logo is so unchanged . . . after 100 years, more or less.  Can you see the sign on the porch, or no?   Anyhow, this picture’s caption is:  “Grandma Warren’s House (George A. Warren Residence) after move/Shows Grandma’s Store and Lucky Boy’s (dogs) pen on right.” 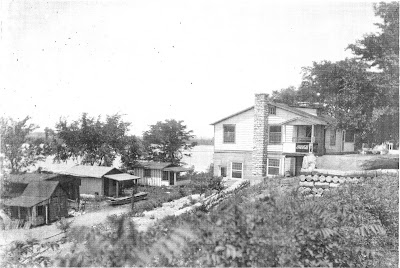 Rose of Sharon isn’t as bad as they say in this article. It’s pretty, so long as it’s planted somewhere it can misbehave. And you’ll think of The Grapes of Wrath every time you see it. 🙂

The above article was provided by the National Association of Realtors. I would provide content, but you may end up with stellar produce such as this eggplant, grown last year, the worst year for our vegetable garden ever:

My husband is a letter carrier in Ferguson, Missouri. His route was particularly hard hit by the Good Friday storms here in St. Louis. Here are some pictures of the devastation.(Pictures taken by Chris “Snailman” Robinson.  Thanks, Chris!) I can promise it looked/looks MUCH WORSE in person.  Take a look:

Godspeed to all who have been affected by this horrible weather, here and elsewhere.